Following a gamma radiography exposure, the winding mechanism counter showed the source had not fully retracted by approximately 5 cm. After several attempts, it was apparent that the source could not be fully retracted.

A survey meter showed a dose rate of 40 to 50 mSv/h at the rear mechanism end and sides of the source container and it was noticed that the locking bar was in the locked/safe position, showing the Green Flag although the source was still not fully retracted.

An attempt was made to pull the drive cable back, to fully retract the source but it would not move backwards because the Pozilock sliding mechanism was in the safe position as confirmed by the coloured identification Flag (Green). It was decided to secure the container and report the situation.

NOTE: At this point having established that the source was only 2 inches from the fully shielded position and within the DU shield, the best option would have been to reconnect the controls, push the lock slide to the expose position and wind the source back into the stored position from 25ft away.

The equipment suppliers were contacted and immediately mobilized a service engineer who attended the site and carried out a full inspection of the device and controls. All the equipment was found to be functioning correctly and within all the gauged tolerances.

After several attempts, it was possible (but not easy) to recreate the situation using a dummy source

The problem with the source not retracting was immediately identified by the operator and appropriate measures were taken to maintain control of the situation. Because of these actions, no significant radiation exposures were received. 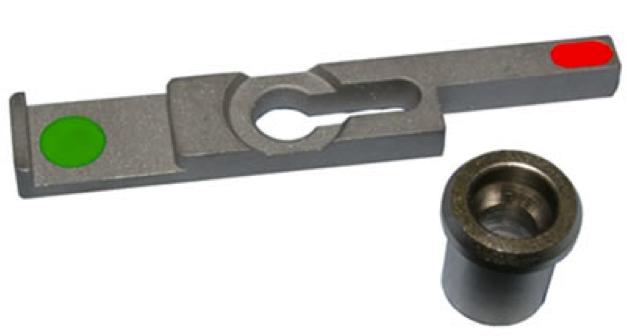 The lock slide and central sleeve showing the chamfered edges of the corresponding components to ensure positive location.

In this position, you can see how the lock slide slides across the front face of the central collar