A six year old boy jumped on to the conveyor belt of an x-ray baggage inspection unit at an airport and passed through the machine. The boy’s mother also followed him through the machine, after attempts to prevent her son from entering it were unsuccessful. Both persons were exposed to the main x-ray beam. The emergency stop was then activated once both persons had emerged from the unit.

The conveyor in question was about 30 cm above ground level and it’s purpose was to allow passengers to check in heavy and outsize baggage. The equipment operator is seated next to the conveyor and was able to view the area where items are loaded onto the conveyor.

The whole body dose received by the boy and his mother was assessed during the subsequent investigation to be approximately 5 µSv.

Despite the low doses involved, the employer must be in control of access to the area inside the machine when it is switched on, and steps must be taken to ensure that persons are not unnecessarily exposed to radiation.

The operators and other staff working with x-ray inspection machines should be able to observe and supervise the entrance to the machine, and be ready to press the emergency stop button should anyone climb onto the conveyor belt.

There have been incidences where babies have passed through x-ray inspection units after parents have placed baby carriers on conveyor belts without removing the baby first. Staff should watch out for baby carriers and ensure that all such items are empty before they are placed on the conveyor. Again, the emergency stop button should be pressed without delay, before the baby enters the x-ray machine.

Not surprisingly, these incidents can often cause distress to members of the public, particularly where babies or young children have been exposed to radiation. In any case, it is recommended that users assess the possible doses to persons who may pass through the machine, eg as part of the prior risk assessment process, and also to provide reassurance that the doses are low if such an incident does occur.

It should also be noted that the conveyor system is not designed for persons, and represents a (potentially more serious) mechanical hazard.

Two engineers were working on a conveyor-type x-ray baggage inspection unit located 2 metres behind another similar unit in a production facility. The units produce 140 kV x-rays in a highly collimated beam. Under normal circumstances the X-ray beam is shielded by the x-ray detector assembly, and dose rates outside the equipment are less than 1 μSv/h. In this incident this assembly had been removed from the unit in front. A contractor, unaware that this had been removed, placed the unit in continuous operation mode, which led to the exposure of the two engineers workiung on the adjacent unit.

The detector assembly had been found to be faulty earlier in the day and had been removed and would be replaced when another became available. The contractor had been told that it was intended to operate all the units in continuous operation mode by the end of the day. The contractor thought it was not possible to generate x-rays without all the shielding in place and was unaware that the interlocks had been overridden. It was not normal practice for contractors to operate the x-ray equipment, nor was this contractor instructed to turn this unit on.

X-rays were generated for approximately 20 minutes before the engineers working on the adjacent unit discovered what was happening. They checked their work position with a dose rate meter which indicated >5000 μSv/h (ie above the maximum scale reading). They immediately turned off the unit, noting how long it had been operating. The incident was not reported until the following day because the company’s Radiation Protection Supervisor was not available. The incident was subsequently reported to the Radiation Protection Adviser who carried out a full investigation. 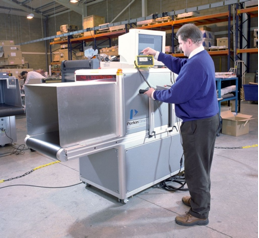 One of the engineers had been issued with a whole body dosemeter, which recorded 0.0 mSv but was unlikely to have been in the primary x-ray beam. Measurements indicated that the equivalent dose within the primary beam would have been 8 mSv. Due to the high degree of beam collimation, the effective (whole body) dose to each engineer was estimated to be 0.04 mSv.

All relevant staff – including contractors and other temporary staff - must be provided with adequate information, instruction and training to ensure that they follow safe working procedures. In this case, the local rules prohibited persons from generating x-rays without all shielding and guarding fitted in place, but these rules were not followed. In such cases, the level of supervision provided for the work should also be questioned.

During maintenance, x-ray equipment should not be left unattended while x-rays are being generated, or even where it is in a state of readiness to generate x-rays.

A radiation survey should always be carried out following any maintenance, and the results should be recorded.

All incidents must be reported without delay. In this case, by the time the incident had been reported, the x-ray machine had been installed at a customer’s premises. Consequently, it was not possible to carry out a detailed dose assessment.